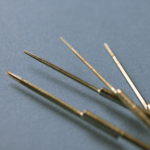 There are many different varieties of professional tattoo needles to choose from. While there is no best needle for stick and poke tattoos, they each have their own advantages. Let’s take a look at how stick and poke needles are labelled.

Tattoo needles are actually composed of a group of tiny needles. They are characterized by:

These features are detailed on the needles packages or listed with the product description. However, the way they are presented differs from website to website. On the next picture, the “Item No.” contains all the needles specifications, except for the taper length. Notice that if the stick and poke needles have been sterilized, their package will also indicate an expiration date.

Wondering what size you needle should be for stick and poke? It’s easy, as there only are 5 stick and poke needle size to choose from. Here are the diameters available:

The first two digits of the item number indicate the needle size. The needles shown on the picture have a #12 diameter (1203RL). This is the most popular size and the one I use for all my stick and poke projects. The middle size is #10 and is commonly used for lining. The smaller sizes, #6 and #8, are sometimes called bugpins even though this term can describe more than just the diameter.

The stick and poke needle size influences ink flow. The narrower it is, the finer the stream of ink will be. A smaller size allows more control, while a bigger size makes shading easier.

The count is the number of needles grouped together and arrangement refers to the way they are clustered. The two digits that follow the diameter code indicate the count. In the last example, 03 (1203RL) indicates a group of 3 needles and RL stands for the arrangement: round liner. On some websites, you will only see the count digit followed by the arrangement letters (e.g. 3RL). Here is a list of the main codes and their meaning:

Round needles are arranged in a circle. They can be either liners (RL) or shaders (RS). Round liners are nice for delicate work like detailed lines, as they are tighter than round shaders. Magnums are used for shading since they deliver a lot of tattoo ink to the skin. Stacked magnums (M2) are stacked more tightly than weaved magnums (M1). Flats come in a straight line so they can be useful for geometrical tattoos.

The next figure shows different examples of counts and arrangements. Note that while the tiny needles are distinct, they are still very close together and therefore produce a single point or line.

For stick and poke tattoos I recommend using round shaders (RS) or round liners (RL) tattoo needles. The ones I’ve used for all the work shown in the stick and poke tattoo ideas gallery are 1203RL. However, don’t hesitate to experiment and test different needles to develop your artistic signature. You can find cheap packages of assorted needles online.

Now that you know the basics, here are my recommendations:

This website uses cookies to improve your experience while you navigate through the website. Out of these, the cookies that are categorized as necessary are stored on your browser as they are essential for the working of basic functionalities of the website. We also use third-party cookies that help us analyze and understand how you use this website. These cookies will be stored in your browser only with your consent. You also have the option to opt-out of these cookies. But opting out of some of these cookies may affect your browsing experience.
Necessary Always Enabled

Any cookies that may not be particularly necessary for the website to function and is used specifically to collect user personal data via analytics, ads, other embedded contents are termed as non-necessary cookies. It is mandatory to procure user consent prior to running these cookies on your website.