Witch hazel is a natural and soothing astringent : when applied on the skin, it causes contraction of the tissues. It can be used to soothe the skin after a stick and poke tattoo and calms skin redness. 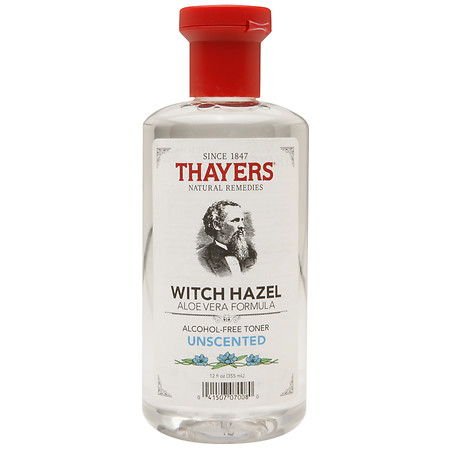 Witch hazel water, a distillate of leaves, bark and twigs, is derived from a plant, Hamamelis virginiana, commonly used for skin soothing. This water must be used in direct application or with a compress, but never for internal use.

If you buy witch hazel water, look for a product that is alcohol free and unscented as Thayers. When applying, you can think of it as a spray bottle. Disposable wipes can also be useful for stick and poke tattoo artists.

The leaves and bark of Hamamelis virginiana contain 8% to 12% of tannin. This substance is attributed to the astringent, anti-inflammatory and haemostatic (causing bleeding to stop) effects of the plant.

Beyond tattoo parlors, witch hazel is known for many usages like natural skin care, post childbirth care, varicose veins treatments, pre-shampoo, sunburn treatments and itch remedy. However, the recognized uses are : bruises, sprains, minor sores, inflammation of the skin and mucous membranes treatment. It is also used to treat feelings of heaviness in the legs.

Witch hazel is a North American shrub, Hamamelis virginiana. The medicinal properties of this plant were well known to Natives Americans and the plant was eventually adopted by the first European settlers. The plant was used to treat hemorrhages, inflammations and hemorrhoids. From the 18th century, the use of witch hazel spread to Europe where it is now grown. Witch hazel is still sold in drugstores across Canada and the United States under different products such as the water solution.

The name witch hazel came from a mistake since it never intended to be a reference to a witch. The term refers to an old Anglo-Saxon word, wych, meaning “flexible”, referring to the soft branches of the shrub. The Native Americans used those branches to make arches.